Last Updated on June 18th, 2019
By: Your Home Security Watch 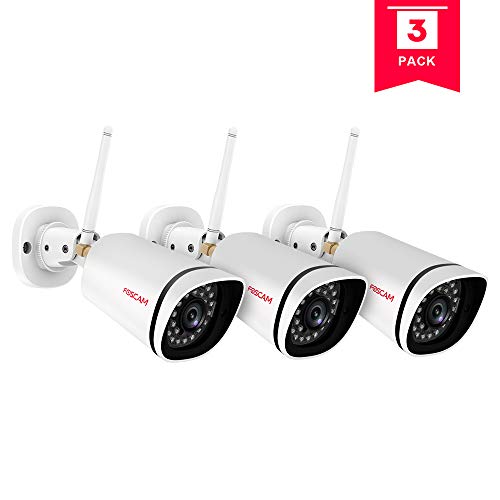 But first, a quick rant, if you don’t mind!

Sometimes, you just have to wonder why certain companies can’t get their act together when it comes to offering the public a simple product that does a simple thing.

Here at YHSW, we’ve seen a lot of ’em (bad cameras), and despite supposedly being made to do basically one simple task – guard your property – there are an amazing number of things that can go wrong within that simple proposal.

In reality, I really can’t be too surprised at this point.  Sometimes a manufacturer can offer up a camera with around 20 great and amazing features, but none of them work that well.

Other companies sometimes just skimp on the build quality and you have a camera that just breaks after a week after being exposed to the elements.

In this age of omnipresent internet and wifi, you’d think that would be a done deal, but that can also easily go wrong as well.

There are so many security camera apps, and so many devices as well, all with varying levels of quality and compatibility.  It’s almost forgivable when something doesn’t work right, due to the lack of interoperability and other such factors.

Almost forgivable, but not quite.

Now I want to talk about a camera that makes me wonder how so many cameras can get things so wrong.  I’m going to review for you now the Foscam FI9900P, an outdoor smart security camera that can be used to guard either home or business.

I have been familiar with the Foscam name for a number of years now, and, to my knowledge, they are a Chinese company, but one that actually does things with care.  These guys have their act together, and so it’s rare that I see a camera from them that sucks.

It’s no wonder – Foscam has been in the security camera business for a while now, and their focus is just that – security cameras.  One visit to their website (foscam.com), tells me that they at least talk a good game.

As luck would have it, Foscam doesn’t fall short on its promises.  Their brand philosophy is this: “to be dedicated and efficient” and focus solely on security cameras.  Ok, so what does this particular model offer?

Features of the Foscam FI9900P

Here’s what the G2 offers, essentially:

First off, let’s delve into the picture quality offered by the Foscam FI9900P.

Foscam makes a bit of a fuss over the fact that they are not making a camera here that is some kind of juiced up 720P camera posing as 1080P.

Instead, what this camera offers is crisp picture quality that you can only get from actual 1080P cameras like the FI9900P.

The Ambrella chipset is no joke either.  Ambrella is an impressive company that is a leader in its field of dynamic video, with its finger on the pulse of several huge industries including police and action cams, drones, surveillance, and more.

The field of view is around 100 degrees, so the field is quite wide.  And that, in addition to the quality level, makes this a near-perfect choice for an outdoor security camera.

It can watch parking lots, driveways, garages, yards, and you’re at the same time getting crystal clear images sent back.

There is something we need to mention here, and that is that if you have a crappy WIFI router, or some kind of crappy mobile device, you’re likely going to have trouble streaming the high quality video from your Foscam to that device.

In other words, make sure that everything in the chain is sufficient to keep the WIFI signal strong, and the device that’s receiving the video or images able to do so.

Customers have reported trouble with signal drops with the Foscam FI9900P, and I think it’s mainly due to bad internet connection, which is not the fault of the camera itself.  You should be looking at your router, or your mobile device, the app you’re using, or even your power source (if you have more than one camera).

Point being – the Foscam FI9900P does come through on video and image quality, which is awesome.  Whether you will flawlessly be able to receive it at all times from anywhere has more to do with the rest of your internet situation than the camera.

Here is an article I wrote about slow internet speed, and why it may be happening to you.  It’s a more general article about the dreaded signal drop, but it certainly applies here with an outdoor home security camera like the Foscam FI9900P, where you have a device that is running an app which receives the data via the cloud, based on whatever router and internet package you have.

The way I see it, it’s one thing to have your Netflix stop working in the middle of a movie or show, yes, that is annoying for sure.

But when we’re talking about protecting your home, family, and valuables, that’s on a whole other level.  You don’t want that signal dropping, and you need to do what you can to make sure it doesn’t drop.

Advice from me is this – Do some testing with your camera (if you choose to purchase this one, which I think you should).  Try different placements of the camera.  Check your internet, test the connection while the cameras are on.  Make sure your router isn’t in the basement behind the furnace.  That kind of thing.

All of this leads to my next point.  So, what the Foscam has done here is made their FI9900P security camera as simple to set up as a camera like this can be.

That said, setting up any outdoor security camera SHOULD take you some time.  Maybe not all afternoon, but give it at least an hour to make sure everything is up and running properly.  It also depends on how many cameras you buy and the layout of your home or business.

In terms of actual parts of the FI9900P, what have we here?

There isn’t much in the box.  Just the camera itself, and a few (important) wires.

As I mentioned, you don’t want to take as little time as possible to hook up your security camera.  You want to do it right.  That said, if you know what you’re doing, it can take less than an hour.

Steps for setup include:

We should mention, at this point, that there have been some gripes we’ve heard tell about the FI9900P, and, if you look closely at the camera and the wires, you might guess what they are.

The two complaints are as follows – one is that the wires are presented to you in a mass cluster of 5 wires. This means, to run the wires into your home, you’re going to need to be a little bit creative.

You don’t want the wires hanging around, or awkwardly crammed anywhere.  The power cable it comes with is 1.5 meters, FYI.

My advice is simply to think about this when you’re deciding where to put the camera.

You’re going to have to run these wires somehow, but since everyone has a different home and a different idea of where you will want you’re camera, this is something you’ll have to deal with yourself.

Perhaps it’s not an issue for you, or perhaps it is.  It’s a consideration nonetheless.

The second complaint with this camera is that the wires are too short.  While it’s true that these are not long wires, they are in fact good quality wires, so that’s a plus.

You’re going to need to find a way to extend them, though.

Earlier, during our rant, we mentioned, in passing, how many not-so-good security cameras can just bite the biscuit very quickly.

One big reason that an inferior outdoor security camera “dies” is because it can’t handle the weather.  If it’s hot, it’s too hot and the camera overheats.

If it’s too cold, the camera’s electronic parts throw in the towel.  If it’s too wet, any inferior security camera will send you a quick message of “surprise, I’m not fully waterproof”, before short circuiting and shutting down for good.

On the other hand, we have here the Foscam FI9900P, which, while perhaps not being the most durable camera in existence, is still pretty damn durable, thank you very much.

For instance, it is rated IP66, which means it’s completely weather proof.  Cameras not given this designation offer no guarantees, but the Foscam FI9900P has the required designation to be used outdoors.

The build of this bullet cam is sturdy and compact.  You could picture it being used perhaps at a border crossing.

It has that official “don’t mess with me” bullet style that some people like.  The antenna, while it is also removable, it very adjustable, and can be adjusted no matter where you mount this camera.

Simply screw the camera in to the place you want it, plug it in, and you’re good to go!  There have been very few complaints that this camera can’t stand up to harsh weather, though no security camera is completely invincible.

With the Foscam FI9900P, there is an infrastructure that leads to the kind of security you can count on, when it comes to operating the camera.

Firstly, there’s the Foscam native app, which, as mentioned, has been designed with the help of Ambrella, to improve the overall image stabilization and quality.

The ease of use of the app relates to the security offered by the Foscam cloud servers, which operates via AWS (Amazon web services), which has generally received high praise across the board for the level of security that it provides.

This camera is ONVIF compatible, with ONVIF being a protocol that allows for interoperability between IP based products such as security cameras.  ONVIF has their own specific mission, and it is worth reading up on, if you want to know more.

Blue Iris is also worth looking into, as it is another option offered by this Foscam camera, and one which requires yet more reading, if you are interested.

Suffice it to say, Foscam has gone to lengths to make sure that their FI9900P adheres to all the proper regulations and codes, and goes out of its way to be the secure camera it claims to be.  The proof is in the pudding, folks.

The overall user rating of this camera, as far as its software configuration goes, is quite favourable.

All things considered, the Foscam FI9900P is a high quality security camera for outdoor use.

To recap, it’s relatively easy to set up, the camera build is nice and durable, withstanding all types of harsh weather, and the camera’s ability to perform the functions it was designed for is quite top notch.

The Foscam FI9900P comes in various colours and quantities, for your consideration.

What is a PoE Home Security Camera and How Does It Work?
Alon Hidden Spy Camera Clock Review
Tenvis JPT3815W Review

What is a PoE Home Security Camera and How Does It Work?
Alon Hidden Spy Camera Clock Review
Tenvis JPT3815W Review