Last Updated on June 22nd, 2019
By: Your Home Security Watch

There are many places, such as airplanes and college campuses, where you are unable to carry a gun or knife.

So, what’s the best way to protect yourself? Carrying a personal self-defense weapon.

Here we will do a complete review of the Smith & Wesson Military & Police Tactical Pen. 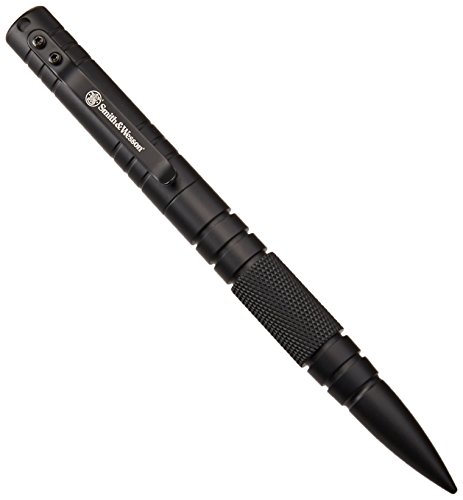 When you think of Smith & Wesson you most likely think of hand guns. The company was started by Horace Smith and Daniel Wesson back in the 1850’s.

They sold their first venture after coming into financial difficulties, but started up again several years later, and have been producing popular hand guns ever since.

Smith & Wesson may be known for their guns, but they make other products as well, including this Military & Police tactical pen. You know you can trust the integrity of the company when it has been operating for well over 150 years.

The biggest issue with this tactical pen is the cap. It snaps on instead of having threads to screw on. The plastic inside of the cap is cheaper and some users have issues with the plastic portion breaking.

Then allowing the cap to fall off of the tactical pen. With this fact, keep in mind that 81% of Amazon purchasers rated this with a 4 or 5 star out of over 500 reviews.

Can I Take it on a Plane?

People like tactical pens because you can take them where you can’t take many other weapons. However, you need to think twice before taking it on a plane.

Many people do take them on their flights and have not had a problem getting them past security. BUT, your tactical pen can be confiscated by TSA as it is technically a weapon.

If it is noticed that you are trying to bring a tactical pen on a flight it could cause some problems for you.

How to Use a Tactical Pen

When using the Smith & Wesson Military & Police Tactical Pen you want to know the best tactics for using it to protect yourself.

If you are being attacked you need to use force to hit the attacker with the sharp point as hard as you can. Look for soft tissue to hit. Focus on areas like eyes, throat, inner thigh, ribs, and groin.

It is important that you are comfortable using the tactical pen. The key to being successful in defending yourself is being powerful and having confidence.

The Smith & Wesson Military & Police Tactical Pen is a good alternative to a traditional weapon. If you are looking for a way to protect yourself without looking like you have a weapon this is a great option.

How to Use a Tactical Pen For Self-Defence
Is Jiu Jitsu Effective For Self-Defense? Q&A with Danny Ruiz of Capitao Jiu-Jitsu & MMA
Street Smart Self Defense Spike Keychain Review

How to Use a Tactical Pen For Self-Defence
Is Jiu Jitsu Effective For Self-Defense? Q&A with Danny Ruiz of Capitao Jiu-Jitsu & MMA
Street Smart Self Defense Spike Keychain Review