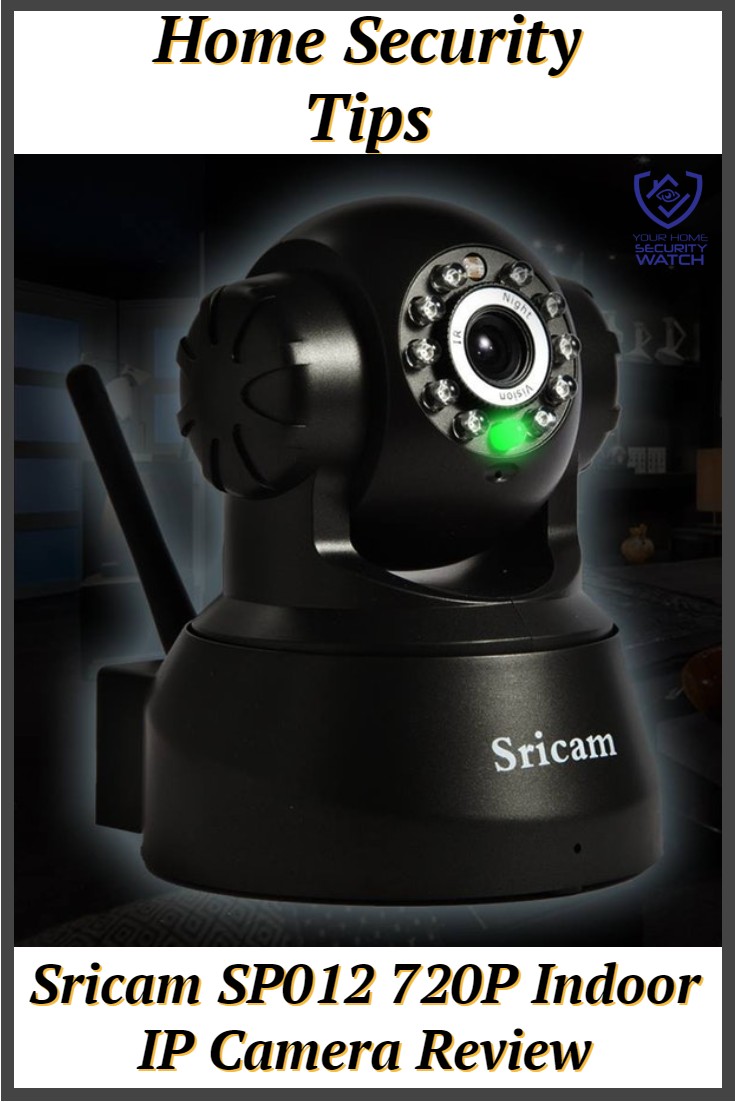 Today, we review a neat little IP pan-and-tilt camera we ordered from Gearbest, called the Sricam SP012, which is a wireless security camera for indoor use, featuring 720P resolution and wifi capabilities.

As we go along, we will talk more about the effectiveness of each of these features as they perform with the Sricam SP012.

At a glance, this camera could be used as a security camera for preventing burglaries and break-ins, but it could just as easily double as a baby or pet monitor due to it’s two-way audio abilities.

It was no doubt made with this in mind, as the SP012 is a fairly non-threatening looking device.  It comes in two colours – black and white.

The Good, The Bad, and The Similar

As security camera experts, we must say that this adjustable ball-shaped camera by Sricam doesn’t look, appearance-wise, a whole lot different from several others that we have come across in our search for the perfect indoor security camera.

We have examined models of similar looking cameras by brands like Mica House, Tupeya, Faleemi, and countless others, and it boils down to one thing: the devil is in the details.

We’ve seen cameras that look almost exactly like this one that crap out or don’t hold up to the features they advertise, and, at the end of the day, it’s always the small details that determine the effectiveness of the product.

And there’s only one way to find that out – test it.  We were curious, as usual, to see if Sricam made a good product or not.

The Sricam also offers via their website (at least they have one), cameras that you might confuse for this one as part of a line of security camera products, including the SP005, SP006, SP017, SP018, SP020, and a number of others.

There are too many of them to mention in this one article here, and so look for individual reviews of some of these cameras on this website.

Now, as far we know, Sricam is a Chinese company, and, upon ordering, we noticed that it was coming directly to us here in the US from China.

It didn’t take long to get to us – about two and a half weeks, plus a day, with no special express shipping demands on our part – and it arrived in its box, as expected.  The box was a bit dinged, but everything inside was in one piece and looked fine. Believe it or not, the dinged box did not have us reaching for the phone to call and complain.  We figured, if this camera is worth anything, a slightly dented box is really the least of our worries.

Looking again at the Sricam website, we noticed a chat box (pictured below), so we decided to give it a try. 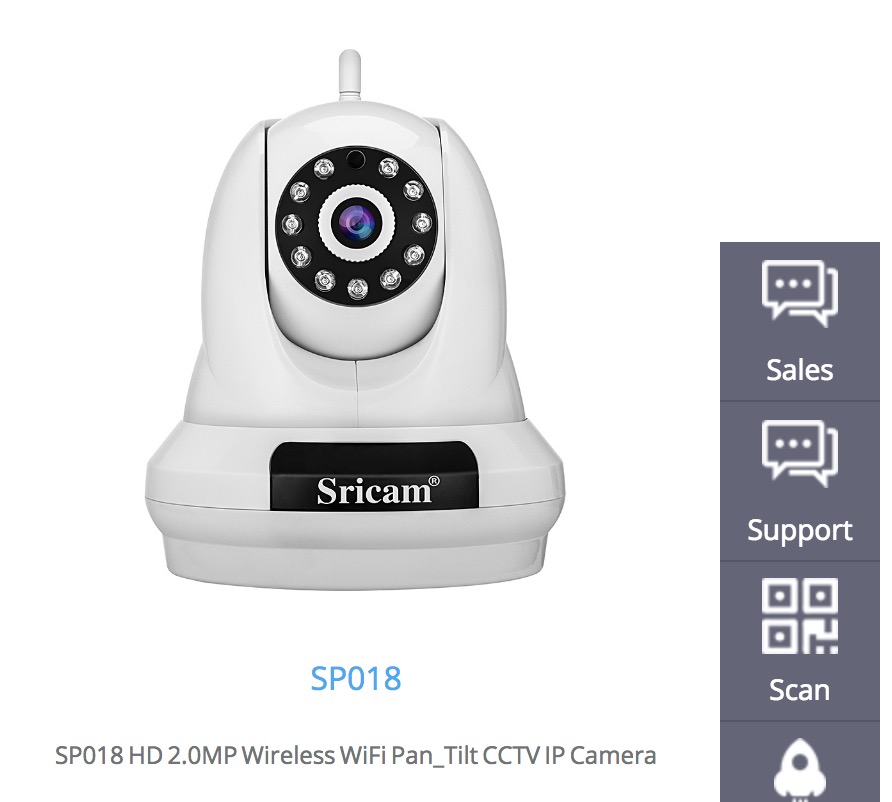 We got a hold of someone quickly, and they were quite helpful, as we asked them a redundant question (“Does the SP012 support WIFI?”) and logged off the chat.

As they are from China, you might expect some sort of language barrier, but no, everything was perfectly understandable and well-explained for their part.

It was then we realized that this company actually might have its act together after all.

Everything that Sricam claims about this camera in terms of what you get with your package is the same on the website as it is in the package.

If you visit the product page on the website, it also contains basically all you need to know in terms of what the Sricam SP012 can do, albeit in the form of some slick ads.

Usually, we have found that if the company website is well done, the product usually is too.  We’re not saying this is always the case with home security products, but it is something we’ve noticed.

What’s In The Package

As we said, this little Sricam SP012 comes exactly as it is described.

You get the following:

The user guide for this product is easy to understand and straight to the point.  This is a good thing for non-technical people, who just want to open the box, and five minutes later, be using the product. 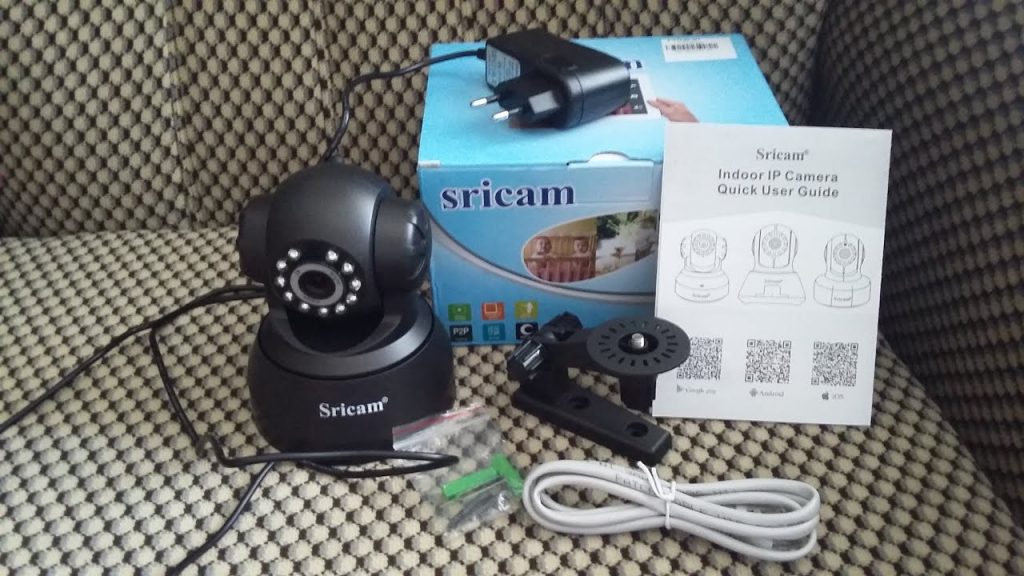 This one is just a fold out booklet with six pages, and all the relevant info is there.  There is no problem understanding the english, as it is well written and makes perfect sense.

It lists all the important contact info if you need help, such as tech email support, phone support, and even a skype support, which is very much appreciated because if you’re offering skype to your customers, you must really be confident!

With the help of the user guide, the Sricam SP012 is a snap to set up.

There really isn’t much to it, and you can have your camera operational within a few minutes.  If you know absolutely nothing about technical things, the hardest part might be installing the app.

If you know how to install an app, you’re going to be in good shape here. The app is easy to install, and once that’s done, the camera is ready to go.  This product is designed to be simple to use, and it is.  There were no glitches in the install whatsoever.

Perhaps this is due to the ONVIF increased operability, or maybe the device just has no apparent flaws.

If you’re wondering about what ONVIF is all about, it is a membership-based non-profit organization based around security products which are IP-based, like the SP012.

ONVIF even has their own website where you can learn more about the security standard and its goals.

The tenets of ONVIF include the following: interoperability, flexibility, future-proof, and quality.

In any case, we had no problem connecting the camera to our network and beginning our surveillance of things.

Once our Sricam was up and running online, we tested out its features.  We were most curious about the pan and tilt, the night vision, the recording of footage, and the two-way audio. After playing with the camera for an hour or so, and testing its many features, it was clear that there is no reason this camera couldn’t provide the needed security for whoever might need it.

That said, just based on its appearance, the Sricam SP012 looks the part of a camera that you might use to keep in touch with your family, because aesthetically, it is very friendly looking.

That said, it could easily monitor anything you want for any reason you want.

Its sound capabilities are good, and so it would be very easy to chat with your kids, a babysitter, or someone coming to watch your house while you’re a way, to make sure everything is alright.

At the same time, the night vision on this camera is high quality because of the many high quality IR LEDs it has, and if there were to be a break in, this camera would serve as a way to see exactly what’s happening, complete with its motion detector which worked great when we tested it.

So, in this way, the Sricam can offer video surveillance which you can record and store as well, if you need to use the playback for any reason.

As Sricam themselves state, the visibility is up to 10 meters at night, and we were able to see details well enough that it was obvious what we were seeing at all times, although we recommend you keep the camera away from any other light sources so as not to interfere with the night vision capabilities. Obviously, this camera is not meant for outside use and cannot handle the elements (no water protection and such), although there’s nothing wrong with using it on a summer night to keep an eye on your teenager’s party.

One thing to consider is that this is not a super durable camera.

By this, we mean it is not like some bullet surveillance cameras that have extra shielding and which can withstand being attacked by an intruder, if this occurs.

The little 5″ tall Sricam simply is still fairly tough, and it’s not flimsy.  However, we did not put it through any “dropping it from 5 feet in the air” type of tests or running it over with a truck, so if you want to try that kind of stuff, it’s on you if it breaks. We must say that although we weren’t at first familiar with this brand Sricam, now that we are able to try this little camera out, we see that Sricam does make a decent camera, and there’s very little to complain about with it.