Last Updated on October 4th, 2019
By: Your Home Security Watch

When you’re talking about glass, many people think there’s only one or two types, and that’s where it ends. However, that’s not the case at all, as there are a lot of types of glass that can be used in all manner of situations and applications on the market today.

One very important type of glass is security glass.

What is security glass?

Unlike regular glass, which offers protection until you smash it, security glass is a lot more difficult to break though, and is why many people use it to make their home more secure. 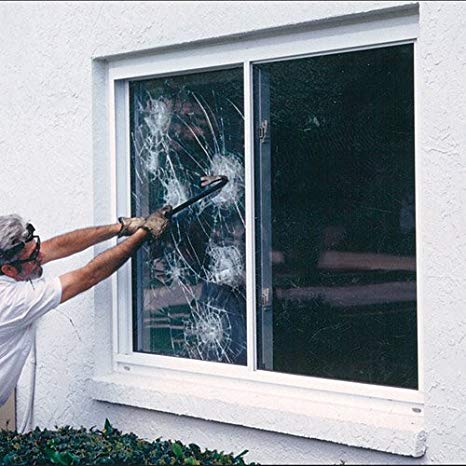 There is more than one type of security glass. If you’re interested in adding a bit more security to your home, read on as we take a closer look at security glass, along with the various types of it, and how you can use it to protect your home.

Security glass, also known in some areas as safety glass, is glass that has been reinforced with additional safety features. Its main goal is to either be less likely to break, or to pose less of a threat when it does get broken. There are four main types of security glass.

But before we get to those different types of security glass, watch this video, which tries to show you just how tough security glass actually is.

Toughened, or tempered glass is made by adding thermal, or sometimes chemical treatments which increase the strength. Tempering will create a balanced internal stress. When such glass is broken, instead of splintering into random shards, it will crumble into smaller, granular chunks that are much less likely to cause injury.

Such glass is often used in various demanding applications, such as vehicle windows, shower doors, as well as for architectural purposes. It’s also a major component of bulletproof glass, and you will find it in diving masks as well.

The entire process of tempering makes the glass five to ten times stronger than regular glass, and this is another reason why you can use it as protection for your home.

It’s also much more resistant to repeated blows, so a potential intruder will really have to struggle in order to break it.

Tempered glass is used in various areas, but most notably, you’ll find it used as part of:

Check out this video showing how strong tempered glass can be, using a series of tests.

Laminated glass, which is what’s most popular as the true “security” glass, is basically a sandwich. In between the two layers of glass, you have an interlayer, which is commonly PVB, or polyvinyl butyral. 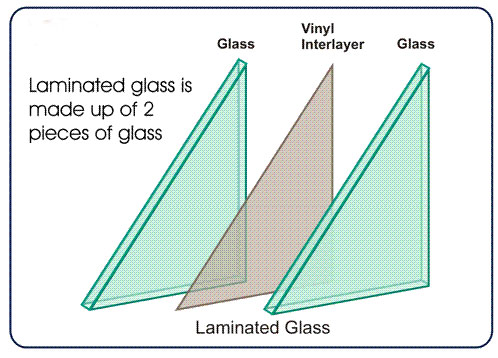 When such glass is broken, the interlayer holds the broken pieces in place. There are no shards that fall off, and you have what’s known as a “spider web” cracking pattern. This is provided the impact isn’t sufficient to completely pierce the glass.

Laminated glass is commonly used when you have a possibility of a human impact, or where the glass could fall if it’s shattered. 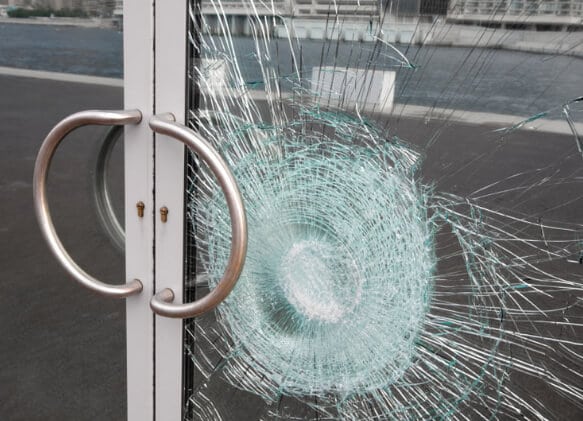 Windshields on cars, for example, are usually made of laminated glass. The PVB interlayer also gives laminated glass a higher sound insulation rating, and blocks quite a lot of UV radiation.

This makes it perfect for usage on doors and windows. Add to that the fact that a thief will have a hard time breaking it, and it’s pretty obvious why it’s the first type of glass that springs to mind when you think “security glass”.

What other applications does laminated glass have?

Then you have wire mesh glass. Wire mesh glass has a mesh, or a grid of thin metal wire that’s embedded within the glass.

And while this may lead you to believe it’s stronger, it’s actually weaker because of the incursions of the wire into the structure.

However, wire mesh glass has excellent fire resistance properties, and is very well rated with both heat and hose streams.

Due to those fire resistance properties, you’ll find it used in any area where you would benefit from a solid fire barrier and safety glass. Examples include:

What they discovered is that subjecting those slides to an impact leads to those micro cracks absorbing and dispersing the energy, thus preventing the glass from shattering. It was around 200 times tougher than untreated glass.

While wire mesh glass and engraved glass aren’t really ideal when you want to add protection to your home for either aesthetic or practical reasons, tempered and laminated glass are great options and the go-to choices for most people.

That said, there isn’t a clear solution as to which one is better for your home, as both have their advantages and disadvantages.

Both types of glasses can be considered as security glass. However, tempered glass has a clear advantage when it comes to strength and break resistance.

When you combine it with something like a glass break detector, you can know that something is happening in your home far before the burglar even gets close to going inside.

On the other hand, when tempered glass does break, it leaves a gaping hole which is often more than enough for a burglar to go in through.

Laminated glass doesn’t do this, as the layer of PVB will keep things together even if the glass is broken.

However, you’ll want to avoid wire mesh glass as it isn’t nearly as strong as laminated or tempered glass, and engraved glass is still not ready for usage in home building scenarios.

At the end of the day, while there’s more than one type of glass, it’s either tempered or laminated glass that springs to mind when discussing security glass.

When you’re trying to protect your home, it is up to you which one you go for, as you pretty much can’t make a mistake with either one of them.

Also, do consider which type of glass is being stocked by your local shop, as if something does happen, you’ll want to replace it right away. Waiting for a week for it to be available when you’ve got a hole in your house is far from ideal.

When you’re at your local glass shop, be sure to ask the employees / owner about their various types of glass, as some shops offer various upgrades that you might be interested in. Some even make their own glass, rather than just provide a retail outlet.

Watch this video by Innotech, which shows the difference between the various grades of security glass.

Let us know your experiences with different types of glass below. We’d appreciate hearing from you!