Last Updated on June 18th, 2019
By: Your Home Security Watch

This particular Zmodo EZCam indoor security camera model ZM-SH721 has improved clarity and picture quality of 720p HD, which is quite easy to install and even easier to use. 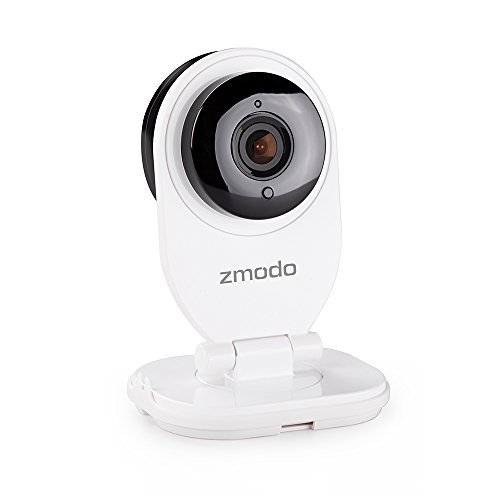 Out of the box, your Zmodo package will include:

This is a smart camera which enables live streaming, which is one of the features that most people ask for nowadays when choosing an indoor (or outdoor) security camera.

You can now see everything that is going on in your home or office while you’re away, with the help of your smartphone or tablet.

Let us get right into this Zmodo 720p wireless security camera review!

*Please note: although this is called the Zmodo camera, it doesn’t run on Z-Wave, it runs on your WIFI network

Zmodo now offers though Amazon three differently sized and shaped Zmodo cameras, with each of these Zmodo cameras having slightly different capabilities (eg. pan and tilt).

In this Zmodo wifi camera review we will focus on the EZCam.

Simple Setup and Installation Of EZCam

You don’t need to be very techy at all to set up and install the Zmodo EZCam.

Once you have it out of the box, simply plug it in to give it power, connect the camera to your home’s router.  You’re already halfway there at this point!

Then, you need to download the Zsight app (available on Google Play Store and Apple App Store), install this app on your smartphone, and the last thing you need to do is log in, and set up your security camera’s functions.

If you’d rather, you can use your PC to watch over your home by first installing the Zviewer app.

All in all, you’ll need not more than 10 minutes to have your camera installed and ready to use.

That said, if nothing we’ve said so far has really made much sense to you, you may need 25 minutes for set-up.  No matter what, it should be relatively easy!

The quality of the picture and video is quite high, as one might expect from 720 p HD camera.

Users have even reported being able to clearly read a car’s license plate 30+ feet away during the daytime.

Overall, people are quite satisfied with the picture and video quality that this security camera provides, not to mention the quality of the night vision.

Certainly, one area that this camera excels is with picture quality, as most users have reported.

Thanks to the built-in infrared LED lights, which light up both people and objects from up to 30 feet away, this camera is able to see very well at night indeed.

There’s one thing that we need to mention here, and that’s if you like to place this Zmodo camera in a window to watch over your yard or porch (eg. pointing it outside), be careful not to put it near anywhere where there is a reflection or a light pointing at it, because this will render footage somewhat useless.

This is more of a thing you’ll run into if you use it as an outdoor camera, which can be done but needs a bit of finessing to get the proper view.

Luckily, you can spot this straight away if you try a few different locations before committing to one in particular.

As mentioned, this Zmodo indoor security camera needs just a WIFI connection to enable the live streaming directly on your smart phone or PC, via the free app

From this point, you have the ability to retrieve pictures and videos whenever you choose, or get a notification if any motion is detected.

This makes this camera an excellent baby monitor as well as a security device, as it can notify you if anything is happening in your home (eg. a sleeping baby wakes up), but also it has two-way audio which is a great feature as well and adds to this being a great all round home use camera for talking to your kids, or your dog if he’s by himself for an extended period.

Another option is to see your video is via Internet Browser on user.meshare.com.

We will say couple of words about the Zsight app since it’s really quite amazing and also free.

Once you have the app, you can just scan the QR code which is on the back of the camera.

Having done this, your camera set up is much easier as Zsight now knows which camera belongs to you.

Some of the settings as part of the app include:

The pros definitely outweigh the cons with this Zmodo camera.

It has smart camera abilities, great night vision, an easy to use app, and two-way audio.  These features alone make it worth the price.

However, if you want to read about some of the cons, we always recommend searching for lower star ratings on pages like Amazon to see what people do not like, in case it becomes a dealbreaker for you.

f That said, most love this camera and it comes highly recommended for the asking price.  4 STARS!