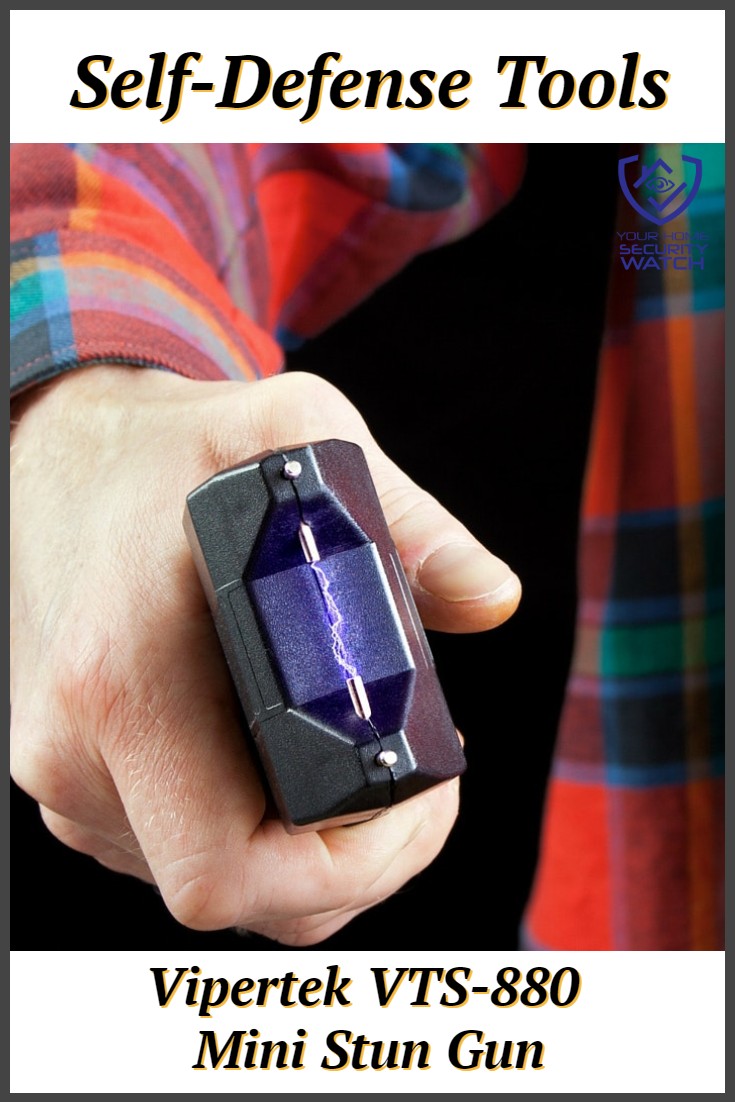 Today we are going to review the Vipertek VTS-880, which is a small, handheld mini stun gun that comes in either pink or black.  It sells for roughly $10 and is super convenient in many ways. The VTS-880 is designed for personal self-defence against attackers, and provides a disorienting zap to anyone who gets too close.

As advertised, the crackle of the stun gun itself might be enough to scare off attackers, but if that’s not enough, the stun gun’s zap is not something that an attacker will able to fight through. More on that shortly…

The Vipertek VTS-880 also doubles as a re-chargeable flashlight, and come with a small black carrying pouch.

Watch this video here by PNYprepper, which gives us a closer look at the Vipertek VTS-880.

This video brings up several good points about the Vipertek VTS-880 that we want to talk about. As PNYprepper says, there are several good reasons to buy this device, such as:

The Vipertek VTS-880 is strong enough to fend off an attacker, but its not going to severely damage them (its not a real stun gun that paralyses a person for any length of time)

As mentioned in the above video, the fact that the VTS-880 sports 35 million V of power is a bit misleading, in that you might assume that something that powerful is likely to lift your attacker off the ground and send them reeling backward, collapsing in a smoky pile.

But no, this device is meant to provide a sharp jolt, and make them not want to fight you.  The VTS-800 is right on the line between hurting someone and just scaring them away.

Watch this video to see some guys fooling around with the Vipertek VTS-800 in order to see if it packs the right punch.

As you can see from the above video, depending on where you connect with the stun gun, it will have more or less of an affect on the attacker.

In this case, you might find that to be ineffective.  This is why we suggest that if you do buy the Vipertek VTS-880, you must at least be aware that you’ll need to have some idea of where to zap your attacker with it.

Our Advice: Be Prepared To Use This Mini Stun Gun Effectively

For instance, we’re not endorsing severely injuring someone, and neither does Vipertech, but we think that if you are attacked in the night by a random person, and you try to zap them and they’re wearing a jacket, it might do nothing!

This could mean the difference of being assaulted / raped, or escaping the confrontation unscathed.

So, we must say that you need to really be ready to use this thing, and if it comes down to it, stick it right in that person’s face and zap away.

They will not necessarily see it coming, and it will definitely stop them long enough for you to get away.  The point here is, it depends on the circumstances you’re in.

If you encounter a stray dog, or some type of animal…feral cat perhaps?  Just the light and the noise might be enough to scare them off.

However, if you are in a dark pathway somewhere, and someone is upon you and their intentions are to hurt you, this is when you aim for the face.

Here is one more video which talks briefly about the Vipertek VTS-880 as a means of self-defence.

In this video, clearly they’re saying that a combination of pepper spray and a mini stun gun like the Vipertek VTS-880 should do the job if you’re truly concerned about self defence, and we agree.

You might want to get both. However, if you know how to operate a stun gun, and have some experience, you’ll probably be fine with just the mini stun gun.

That said, when JP StunGun (the man in the above video) says that you can “hit them anywhere” with the stun gun, we don’t exactly agree.

You can only hit them where it will hurt.  If you zap them in a thick pant leg, and they don’t feel it, that’s it – you’ve lost your chance, and that’s not something you want to risk.

Personally, we feel that the VTS-880 is a great self-defense tool, but you need to know where to zap with it.  Bare skin, thin clothes, right in the face.

If you truly feel threatened by someone and they’ve made physical contact with you, there’s no going back.  Jam that thing in their face and blast them.

Do NOT be afraid and aim for their chest if they’re wearing a leather jacket, but because you don’t want to hurt them.  They’re GOING to hurt you, so friggin’ nail them and get out of there. If you are someone who is concerned with personal safety, such as a student who walks home alone late from a class, or a person who likes to take their dog for a late night walk, the Vipertek is designed just for you.

Really, this item is so inexpensive that if you are even slightly concerned about travelling around by yourself, the Vipertek VTS-880 should do the trick.

However, if you’re looking for a stun gun that has packs a real wallop, keep in mind that this is a fairly small device, but it does have a fierce little zap.

The real question is, can an attacker withstand its zap.  As we’ve stressed here, you need to aim that little thing.

There’s no way in hell anyone will keep attacking you if you hit them in the right spot on their body with a good zap.

Don’t be afraid to lay it on them either.  We recommend the black one because it is easier to conceal.  That said, the pink one is cute and probably isn’t going to be recognized as a mini stun gun right away.

Overall, the Vipertek VTS-880 is quite easy to carry around, and the fact that it can funtion as a flashlight unless trouble comes along makes it useful in any circumstance.

It is super easy to recharge, with a plug built right into the device.  Just pop it out and plug it into the wall.

In terms of self-defence, double down and get some pepper spray and learn to use them, and no one is going to be messing with you anytime soon.