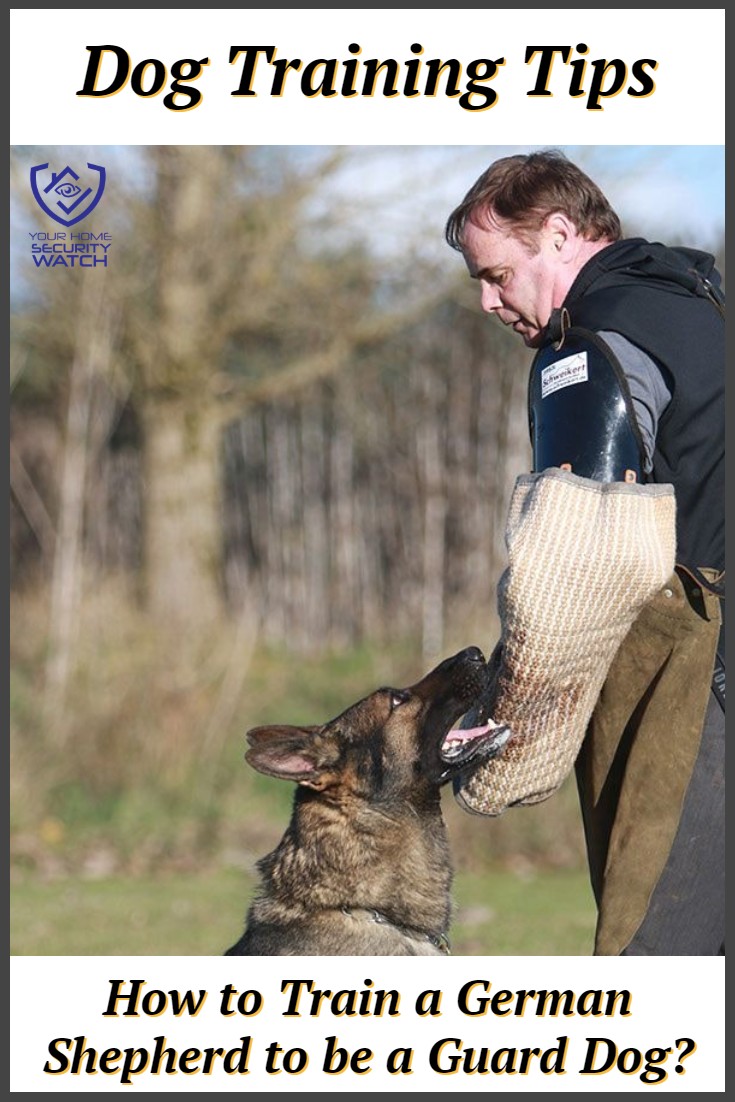 Originally bred for herding, the German shepherd is one of the most popular working dog breeds. You can find this dog as a search dog, a scout dog, a guide dog, a detection dog, a patrol dog, an attack dog, and a guard dog.

Its intelligence, curiosity, strength, and loyalty are responsible for its versatility and its place as the second most popular breed in the United States.

If you want a guard dog, a German shepherd is likely your best decision.  Get one as a puppy and they’ll be even easier to train. We will explore why this breed is popular as a working dog and how a German Shepherd becomes a guard dog.

•    High-energy: Since they were bred to herd livestock, they are active dogs.

•    Intelligent: They are curious and quick to learn.

•    Protective: Probably due to their herding origin, these dogs will attack a threat.

•    Alert: Once again, this is because they were bred as shepherds.

•    Confident: These dogs are not nervous or fearful.

•    Agile: They can be fast, but their typical gait is a smooth, graceful trot.

•    Eager to please: This increases the ease of training.

•    Courageous: This is a reason for their involvement in search and rescue, as well as in other service areas. Training Your German Shepherd as a Guard Dog

Guard dogs ideally will not only alert their owner of a threat but will take action against the threat. To best train a guard dog, the simulations should vary and be as realistic as possible, while keeping the trainers safe.

German Shepherds’ intelligence and trainability are major components in their excellence as guard dogs. If trained well, German Shepherds are capable of analyzing situations on their own and determining a suitable course of action.

No matter what a dog’s future may be, your dog should have proper socialization and obedience training.

By exposing your dog to a wide variety of people, dogs, sounds, and situations while the dog is young, you can avoid later issues of nervousness, aggression, and shyness. Obedience training will lead to a dog that listens to your commands, and therefore a dog that is safer and more pleasant to own. Especially in the case of large dogs, overly rambunctious greetings can knock people over, and training can keep this from becoming an issue.

Your dog should learn to bark when his territory is invaded. However, he should stop barking when you command him to, and he should not bark at people when they are not on your property.

Additionally, your German shepherd needs frequent mental and physical exercise. A bored dog will often develop undesirable habits, such as hyperactivity and chewing on objects.

By playing with your dog, you can help prevent boredom. It also helps increase the bond between you and your dog, and therefore the loyalty of your dog.

Besides learning the basics, your German shepherd and future guard dog should learn the difference between friend and foe.

A dog that is trained to attack intruders is a liability, especially if not trained properly. A dog that jumps on people to greet them is dangerous enough; a dog that labels every stranger, as a threat is far worse.

In some places, it is illegal to own a trained guard dog. Guard dog training is not ideal for every dog, nor is a guard dog perfect for every person.

It may be enough to train your dog to announce visitors, and your dog will be safer from invaders. However, if you proceed with the training, your German shepherd will next learn how to identify threats and end them.

Different times, places, and methods of attack will teach the dog to analyze the situation and act accordingly, instead of teaching the dog only to defend in one simulated situation.

It is essential, as an invader is unlikely to attack exactly as the simulation demonstrates. After completing training, your guard dog should be able to handle multiple attackers and various kinds of weapons. For instance, if the threat is carrying a stick, your dog should attack differently than if the person is carrying a gun.

Dogs trained for competitions will expect a particular situation and be distressed or confused by different conditions, whereas dogs trained for protection will be prepared for a wide variety of situations.

It is the difference between memorizing the answers to the exam and mastering the material.

The German shepherd is a highly versatile breed. From family dogs to guide dogs to police dogs, this breed works hard and is good at its job.

It’s loyalty, protectiveness, and intelligence makes it an ideal candidate for guard dog training. If you want a guard dog, you will have a hard time finding a better breed.