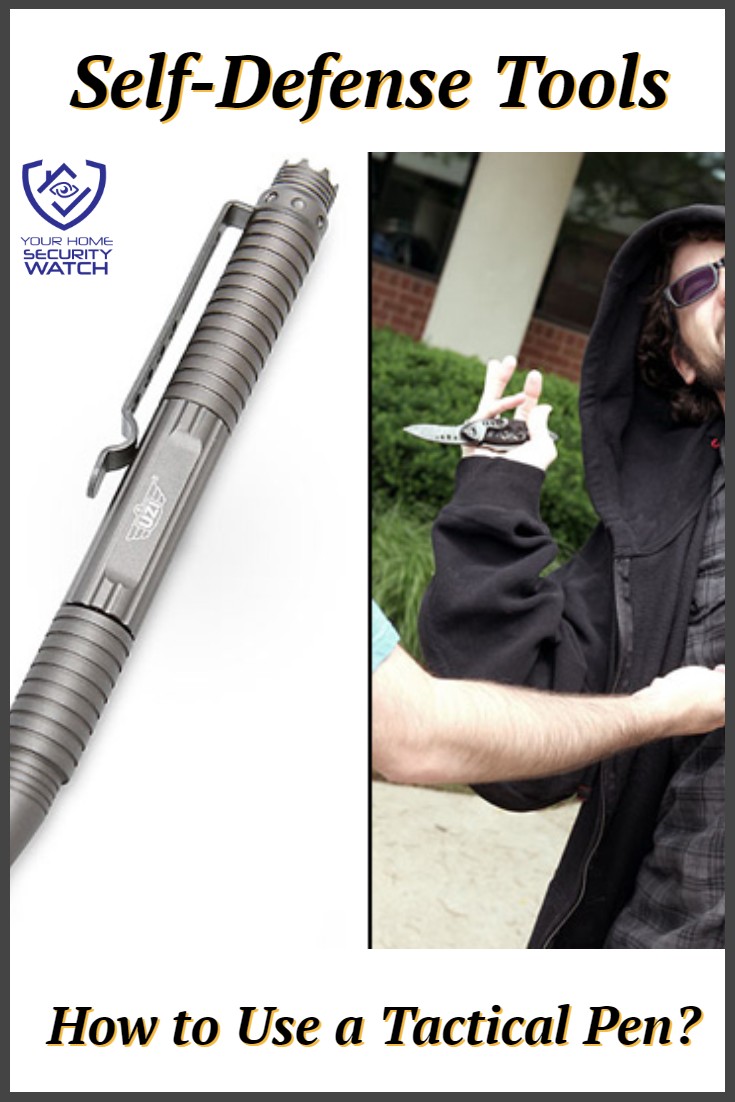 You never know when you’re going to need a self-defence tool, such as a tactical pen.  And you definitely shouldn’t wait for something to happen before you start considering wearing such object with you.

That logic is backwards – get the tool first and be ready for when it happens!  And most importantly, know how to use it! Nowadays, there are plenty of personal security tools you can use to help protect yourself from thieves or any other attacker. You can choose from a wide range of stun guns, teasers, flashlights, and – what we’ll be talking about today – the unassuming tactical pen.

Simply having one of these versatile pens can do the job, and they are discreet, as well as super convenient.

Knowing how to use a tactical pen is the first thing you should learn, since having one and not using it correctly might end up hurting yourself and not the attacker.

But, let’s start from the beginning.

What Are Tactical Pens Used For?

This multitool is designed to help protect yourself from a possible attacker. It looks like an ordinary pen and you can even write with it, except it’s bigger and usually heavier, but that’s not enough for someone to recognize its true purpose.

This actually gives you an advantage as the possible attacker won’t know you have something to defend yourself.

Their small size allows you to carry it in your purse, pocket, a glove box, checkbox, briefcase or anywhere you can easily grab it in case of an emergency.

So, keeping it at the bottom of your purse or in some hard-to-reach place won’t help you a lot in a situation when you have to react quickly.

How Do They Work?

The common tactical pen has a sharp, glass breaking tip and it’s made out of high grade steel like an aircraft aluminum which ensures you give the attacker an effective strike, enough to stop them and hopefully incapacitate them.

So, besides using it for writing, you can use it for preventing someone from its intention by causing a minor wound, and even for breaking glass if used properly. Some of them have additional features like a whistle or ferro fire-starting rod.

When it comes to using tactical pens for self-defence, there are few techniques you can use to stop the attacker from attacking you and causing damage

First, you should have a plan. Try to look more aggressive than you might feel so that the attacker doesn’t get the impression that you could be an easy target.  Easier said than done, but if you are armed and they don’t know it, you have that advantage at least.

Second, take a quick look at your opponent to target specific areas of his/her body. The most vulnerable targets are their face, especially their eyes and nose, the base of the neck, sternum, throat, armpits, ribs, groin, and knees.

Actually, they have plenty of soft spots.  If you realize someone is going to harm you, we suggest seeing them not as a scary attacker but as a dummy that you’re going to put holes in with your pen.

If they’ve crossed the line and they’re coming to get you, they deserve no mercy.  Be ready to give them a taste of their own medicine. Of course, in a dangerous situation you would stab them at whatever point you could reach, but just imagine the pain they will feel and how weak they will become when stabbed with the sharp point of the tactical pen right between their ribs.

They aren’t going to be doing too much after that, but, even still, if you get a shot in, don’t lower your guard until you are free and clear.  The purpose is not to take them down, but just get the hell out of there!

Third, when you do strike, strike your opponent strong and quickly. You need to be fast and give the attacker an effective strike in one of the vulnerable targets, or at least few good strikes in any other area. If your tactical pen has ridges on the top, you can use it in both ways, striking upward and downward since the pen is long enough to come out both ways from your hand.

Fourth, make several repeated strikes, not just one. It’s very possible that the first strike won’t be enough to stop the attacker from their intention, especially if you don’t manage to stab them in the right place and with the right force, so try to make several quick and strong.

Think of it this way.  They want to inflict damage on you, this is their goal.  So, your best bet is to put a lot of energy into that first defence by getting as many shots in as you can before they can do any damage to you.

It might help to scream in their face while you do it, just to throw them off balance.  These guys might be big and ugly, but they’re probably not going to expect you to be a ball of rage armed with a lethal pen coming back at them, so give them what they don’t expect.

But what is most important to make those strikes connect. What To Do If Your Attacker Gets You By The Neck

Imagine a situation when the attacker grabs your throat with one of their hands and you can’t reach any area but the very hand that’s holding you around your neck.  Not a good scenario, that’s for sure.

In that case, targeting the attacker’s eyes, neck, sternum or other vulnerable point is not an option, especially if you are a smaller female.

What you should do in such case, is reach for your tactical pen with the hand closest to it, and stab the opponent’s arm that’s around your neck few times.

But, don’t do only this and expect them to let go. Once you hurt their arm you could easily come closer to their face and go for it.

Even if they cover their face with both hands don’t stop. Keep going until you make sure the attacker is weak enough or you create space enough to try and escape from them.

Here’s one tactical pen video that will present you exactly this situation as well as few more useful tips about using this self-defense tool the right way:

Use Your Tactical Pen as a Sword or Stick

That’s right. You can improvise a sword or stick using your tactical pen. Just strike hard and make sure you have a good grip. You will cause great pain to your attacker that will stop him from his intention to do damage.

Remember, if you do deliver a strong blow to your opponent, and they are dazed or disoriented, now is the best time to run for it.

Use It as a Knife

Turn your tactical pen upside down and poke your opponent.

You can easily harm their eyes if you have the right angle, and that’s a blow that they’re not going to recover from easily, which will then give you time to run away from this situation.

What to Know Before Buying

Even though this self-defence tool is aimed to remove a possible threat and enable you a safe gateway, it’s powerful enough to cause even death.

So, you might want to take this into account before buying and taking a possible weapon with you – because that’s what it is, and you should know it by just hearing the word “tactical” being part of its name.

Tactical weapons are often used by soldiers, who are often found in life or death struggles.

Nevertheless, tactical pens are legal.  But, if by any chance you get involved in a trial, have in mind that the lawyer could always say you have bought it with the intention to use it at some point. We’ve contacted the Transportation Security Administration (TSA) agency of the U.S. Department of Homeland Security if people can bring tactical pens on planes.

It turns out it must be packed in your checked bag, as with any other self-defence item. You can also ship it to your destination. For more information, click here.

You can find them at Walmart, eBay, Amazon, etc. Here are few great suggestions for the best we found on Amazon.

Use as Glass Breaker

Another useful feature of this self-defence tool is that it includes glass breaker tip. You can use it to free yourself or someone else from a vehicle or another space that has thick glass door or window.

You can see how it works as well as other features like the DNA catching tip in the following tactical pen demo below:

Self-defence items like tactical pens could save your life, and they are certainly not toys.

Make sure you get all the needed information before you buy yourself a tactical pen, and, once you own one, take the time to learn how to use it properly, as we have discussed above.