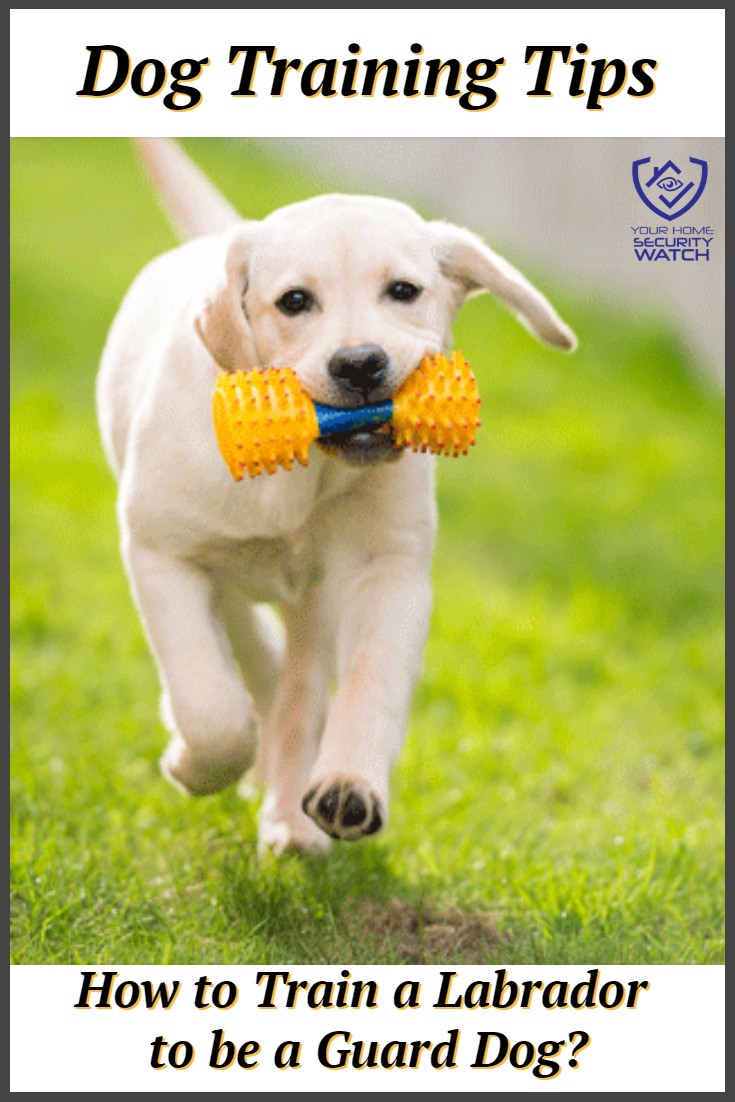 We all love the idea of getting a friendly, cuddly and sweet dog, but sometimes we desire more of an aggressive dog that can safeguard our young ones. Well, it turns out that getting the best of both worlds is not that difficult.

Believe it or not, Labradors (AKA the friendliest dog breed of all) can be trained to become guard dogs. It does require a few innovative techniques and a lot of patience though. Now, here are some of the tips and techniques that have personally worked for me as well as other people to train their dogs. *Before getting to our instructions, we must advise first that guard dog training is a very serious matter, and we would recommend enlisting in the help of a professional in your area to ensure the training goes to plan.  If you choose to do this yourself, so be it, however, we at this website take no personal responsibility for the results of this training.  As they say, results may vary!

The seven steps to success in training the Labrador:

1.   Put Safety first. You must wear protective gloves that not only cover your hand but your entire arm. It is a necessary safety precaution to prevent injury.

2.    Make your dog comfortable and then get him to sit down. Your pet does need to respond to basic commands like sit, come, roll, etc. before teaching him how to be a guard dog.

3.    Oh, the magic number three. Try putting your hand in front of his face to irritate him. It used to work so well with my dog, especially when she was still teething in the first year of her life. While she chews down on your protected arm make sure to shout “ATTACK” or any word you want him to attack people on. Now you’ll really understand why wearing that glove was so important.

4.    Praising the dog verbally or through treats is an integral part of this process, and this won’t work without both of them. By repeating steps three and four, the dog will understand that this is something you want him to do and it isn’t much of a bad thing. Also, the dog will begin to correlate between the word “attack” and the actual act of attacking an intruder. Try to do the same thing then, but from a larger distance between you and the dog. If he doesn’t respond, repeat steps three and four till he gets it.

5.    After a recuperation period and a well-deserved break for your beloved pet, you should start taking things to the next level. It can be done by getting a fake blow up doll that resembles a human being and leaves it at a safe distance away from your pet. Naturally, just point at the “fake” intruder and say “attack.” It might not work at the beginning, and your dog might attack your arm as he was trained to do that. If that happens, make sure not to be discouraged and know that that is entirely reasonable. They understand it in the end if you keep on pointing to the “fake” intruder and they eventually see your hand. Once you are successful at this step repeat it for 5 to 7 times to make sure your dog has gotten the idea of your arm as a potential lunch out of his head.

6.    This one will require the help of a very loyal friend. To take it a step further, try getting one of your friends to act as the intruder but never forget – put safety first by wearing a complete protective outfit this time. You’ll do the same as the “fake” doll. So, just remember pointing at the so called “intruder” and then yelling “attack.” Repeat this also for 5 to 7 times till your pet is certain of what he is doing. However, if you forget to treat him for his success he will lack the motivation to keep going, and it would be practically impossible to get him to do that.

7.    To me, this is the most important step of them all. You need to teach your dog the “stop” command because you might need him to seize the attack on the intruder. At some point or another, it can be done at the beginning by yelling “STOP” while holding him away from the “intruder.” It would be better to have your dog on a leash at this point. Also, a treat will go a long way, particularly at this stage as it is most needed.

It definitely goes without saying that a Labrador is a very friendly dog, but it can be trained to attack intruders through these 7 simple steps.

I do have to state however that even though Labradors signal all the time if there are any people around which is helpful if you are looking out for intruders but they aren’t specialized attack dogs.

So, if you are getting a dog for the sole purpose of guarding then I would not really recommend this breed.

Having said that, Labradors can be trained to become guard dogs, but with a little bit of patience and as I have mentioned above, with a lot and a lot of treats, please stay with us for more information. Thanks!