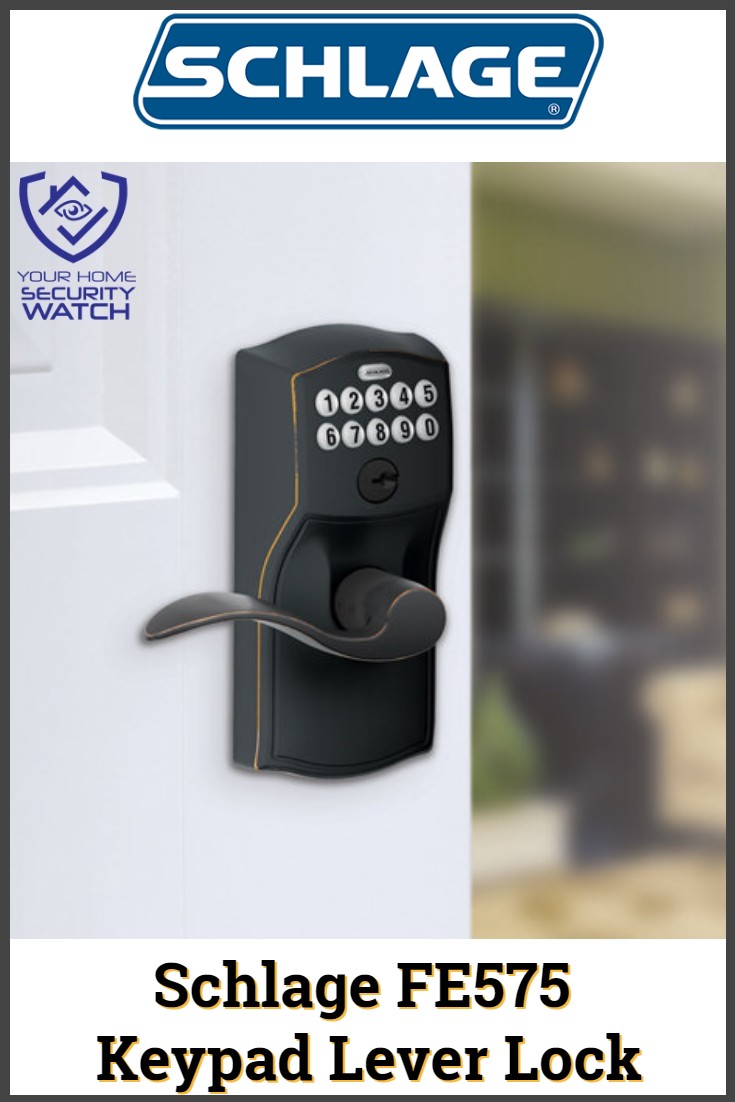 Off the bat, we must say we are fans of Schlage locks.  We’ve reviewed many, and it is a rare occurrence when we have something less than favorable to say about one of their keyless deadbolts.

Today, we take a look at the Schlage FE575 Keypad Lever Lock, which is a solid piece of hardware very much in line with all the other Schlage locks, featuring superior security, well-crafted aesthetic design work, and compatibility with the majority of interior and exterior doors.

On top of that, its reasonably priced most anywhere you can pick it up, especially considering the value you receive for your money.

After our intro, we basically could just leave it at that, but there is much to say about why we like the FE575, other than it maintains the usual level of security and quality from Schlage.

In case you don’t know, Schlage has been a long-standing seller of residential and commercial grade deadbolt locks for decades, and they have refined their approach to the point where their products are looked upon as industry standards, as they routinely outsell and outclass the competition.

Like certain sports teams, they simply dominate the industry year after year.  The FE575 has a slightly different style to it from other Schlage locks, but the things that we do like about other popular Schlage locks has not been left out here.

Installation Of The FE575

The installation process is quick and easy. With just a screwdriver you can manage this job in a matter of minutes, even without a lot of handyman experience.

Since the FE575 fits most standard size doors, you can choose whatever door you think this lock compliments, taking into considerations that the dimensions of this deadbolt are the following: 2.8 x 3 x 6.8 inches.

With this in mind, you can decide if this will work with your door, although chances are it will. Once the lock is installed, it must be programmed. It comes with a pre-programmed code, which you should change to your own code.

Leaving the code as is is not a good idea, and it is important to choose your own code.

The steps you need to do to change the programming code are as follows:

Keyless Operation Of The Schlage FE575 The primary advantage of this Schlage keypad lock is that it is considered to be keyless.

This means that it operates without the need for a key, and so all of the issues that go along with having to use a key can now be a thing of the past!

Going keyless means its just you knowing your code, and you can also program in up to 19 user codes, which means this lock is a great choice for a business with a small staff, or a home with a large family.

With over 10 000 possible combinations to program, there is no way a burglar will be able to get past this lock.

This lock is also electronic, in that it is battery operated in order to use the keypad, which is illuminated / backlit and one of the best aesthetic features of this lock.

Simply enter your code, and you’re in. Close the door behind you and it locks automatically four seconds later.

Enter the wrong code 4 times, and the lock will shut down for 30 seconds before letting you try again.

Adding or deleting an access code with FE575 is also short and simple process. If you want to add a new entering code different from the pre-installed code, follow these steps:

You can see this process of changing of the programming code and also deleting one in the video below.  It may be an older model of the lock, but the process is the same. This lock is ANSI certified Grade 2, meaning its considered tough enough for home use.

To be honest, anyone who “attacks” the lock, being a Grade 2 lock, would have to bring a load of gear with them to successfully get past the FE575’s hardware.

Most burglars don’t have time to hit a deadbolt with a sledge hammer 100 times in order to steal your entertainment system.

This lock does have a lever, which might make you think it has a weak point as a burglar can grab it and/or smash away at it, but the lever rotates even while locked to make it even harder for blunt force attacks to do their damage.

From the inside, you are not locked in your own home.  You simply leave the house by turning the lever, and exiting.

4 seconds later, the lock is engaged once again.  Except this time, if you forget your key – no big deal, just use the code!

Also, this lock is completely weatherproof, meaning that you can expose this lock to what’s going on outside, whether its rain, snow, or the sun beating down, and the lock will still look its best after a long time has passed.

It is meant to last years, and customers report that it does so without any fading of numbers or lack of luster.

The FE575 is corrosion and abrasion resistant, and this again is one of the better features of this lock – its in it for the long haul. The power consumption on this Schlage lock is low, meaning that once you install the lock and the batteries are working, the 9 volt alkaline battery should last you several years.

That said, when power is running low, this Schlage lock will notify you by beeping and flashing a red light.

If, in the event you don’t change the batteries in time, and the lock “dies”, you will need your key to open it.

Yes, this lock also has a key “just in case”, so really the only time you’ll need it is in the event of the batteries dying.  Otherwise, you can do without it.

Replacing the battery is easy – just a few quick turns with your trusty screwdriver and you can access the battery and replace it.

Because the FE575 has flash memory, it will remember all of your previous settings so there’s no need to reprogram. 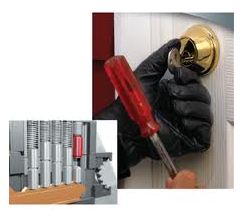 There is one main drawback we think we should mention about the FE575. While this lock is solidly made, and functions well, what it is not is bump-proof.

In fact, most locks that have a keyhole/keyway are susceptible to lock bumping, which has lately become a problem in North America, allowing crooks to perform a fairly simple operation with a “bump key” and gain access to your home.

If you haven’t heard of this, you should read our article on bump-proof locks to see what this means, as it is worth considering.

While the FE575 isn’t going to be on everyone’s front door due to its design, this lock will definitely suit a variety of situations as it is a formidable lock, and well built.

It has many features that users can and do appreciate, and there are very few downsides to using this lock.  It is strong, durable, looks good, and the touch pad is excellent.

The one downside which could be a deal breaker is the lock bumping, but to be fair not everyone is so concerned about lock bumping as a potential problem.

Still, we must deduct at least one point for this, giving this lock 3.5 STARS.