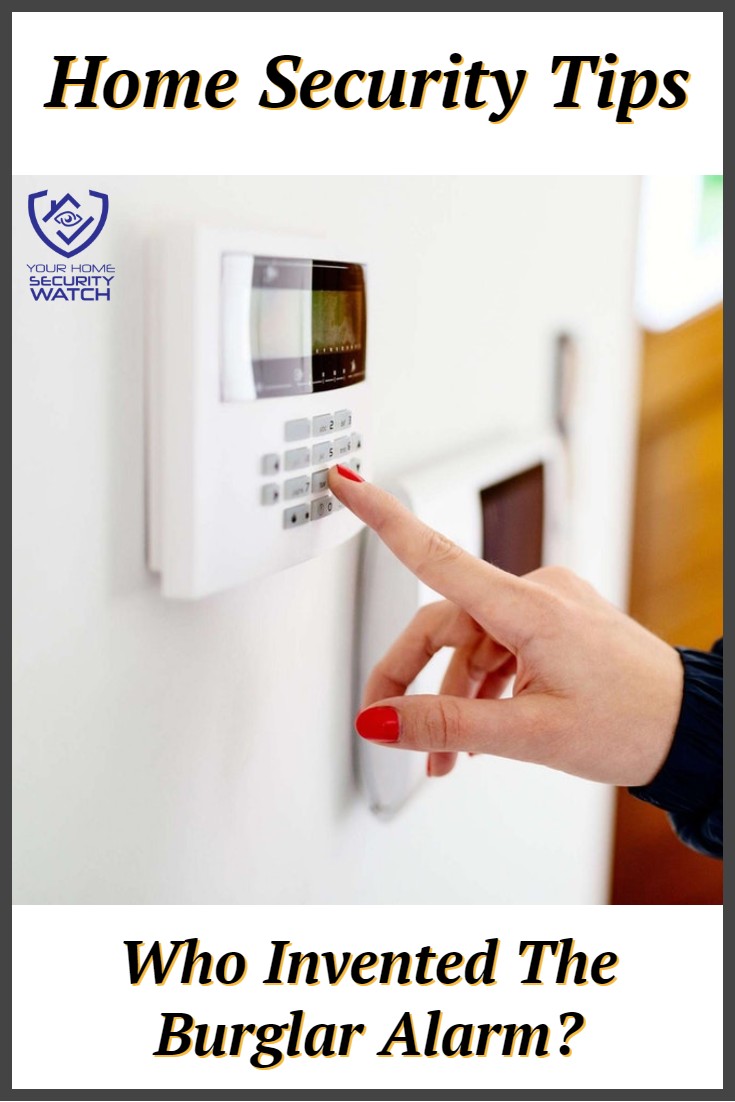 Who invented the burglar alarm?  These devices are so common these days, that it’s difficult to imagine a time when there wasn’t such a thing as a burglar alarm.

What Is A Burglar Alarm Exactly?

Before we talk about the inventor of this highly practical device, let’s first define it.

The word alarm is taken from the archaic word alarum, and could be used to refer to the toll of a bell, or an actual man on watch who would signify an intruder with shouts or cries.

For example, an alarum might be the lone individual who sat high up in a ship’s crow’s nest watching for other ships, land, or any other hazards that might pose a threat. An alarum, or alarm, could also be a guard dog, perhaps man’s oldest alarm, who has historically been used to guard our most prized possessions.

The word “alarm” can also simply refer to a feeling one gets, as in a sense of urgency combined with stress.

In this article, we are specifically referring to the device that emits some kind of loud noise to give us with a warning that some unwanted presence on our property, or in our home.

Nowadays, you generally program a burglar alarm yourself, and they are often “smart”, as in linked to our WIFI, and able to detect motion using sensors. 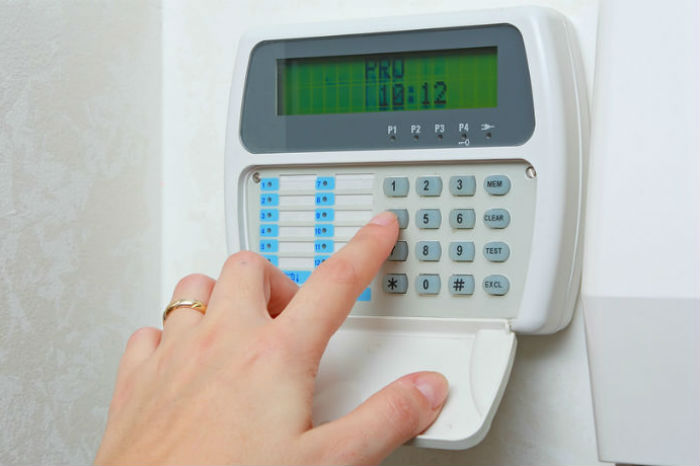 In the past, burglar alarms were looked after by security companies, who would monitor homes and wait for an intruder to sound the alarm, and then respond to it.

Now, burglar alarms sometimes do send a message to a security company, but not always. It depends on the make and model.

When a burglar alarm sounds, it is not a pleasant noise, as it is meant to demand attention.

Here’s an example of a burglar alarm sounding.

Sometimes, it is accompanied by some sort of flashing light, or message to reinforce the initial noise (ie. “Intruder Alert!”).  Often times, all of these things are happening at once.

Again, it depends on the type of burglar alarm you have, whether it has lights and a human voice to accompany the initial alarm.

There are, of course, other types of alarms, such as alarm clocks – the half clock / half alarm device that wakes us up in the morning – to tell us to go to work or school.

These too are designed not to be ignored, but sometimes they are designed to be at least somewhat entertaining.

There are also smoke alarms, which warn us about potential blazes happening in our home.

All those other alarms aside, today we’re talking today specifically about burglar alarms.

Actually, the purpose of a burglar alarm is basically twofold.

One, it lets us know that we have been intruded upon, and, two, it notifies the intruder that anyone in the vicinity is probably aware of their presence.

Here below is a video showing a typical home alarm system, by ADT.

With this particular model, when the alarm sounds, and the ADT people are notified, who then send out the police to your residence to see what’s happening.

Who Invented The First Burglar Alarm?

The burglar alarm was first invented in 1850 and patented as “Improvement in Electro-magnetic Alarms” in Boston on June 21st, 1853, by a man named Reverend Augustus Russell Pope.

Pope, who was adept at both mechanics and physics, was a clergyman and an inventor. He was known to give lectures on these subjects which made his ingenuity quite apparent.

One of the subjects he was best known for was the telegraph, which, incidentally, was the basis for the technology behind the invention of the first burglar alarm. You might be wondering how this first burglar alarm worked.  Well, whereas today’s alarms often make all kinds of loud noises, the first alarm system was actually a form of telegraph system.

It uses batteries, electricity, current, and electromagnetism to send energy down a wire until it reaches a bell, which would then ring.

The telegraph is known for sending messages across country.  This new alarm invention would “react”, so that if a window or door opened, the signal traveled down the wire, and the bell would sound.

Sadly, Augustus Pope succumbed to illness in 1858, dying at the early age of 39, but not before selling the rights for his patented burglar alarm system to a businessman named Edwin Holmes.

Holmes was the man responsible for the commercialization and popularization of the electromagnetic burglar alarm, as well as creating the first large-scale alarm network in the United States.

As with most inventions, there is an interesting story of its rise to popularity that took place behind the scenes.

Before his untimely death, Pope sold the alarm technology to Holmes for the tidy sum of about $10 000.

Back in those times, this was indeed no small amount.

Clearly Holmes had faith that this invention would eventually be popular.  How did he know?

We must assume that Edwin Holmes not only had faith in the novelty of this new alarm invention, but he must have also realized that crime in America was a problem that would need to be dealt with.

Obviously, people couldn’t always rely on the authorities to defend their homes for them.

In a way, today’s modern smart technology was born at this moment. Edwin Holmes certainly did not waste any time.

The year of Pope’s death, Holmes installed an alarm in his own Boston home, and started venturing into the business of selling alarms to others who might see the need for such a warning system.

This is where he met his first hurdle, which was that not enough people were interested in this new technology for him to make a go of it.

The problem was that there simply weren’t enough robbers, or petty thieves in Boston for people to have any vested interest in such an invention.  The time was not yet right.

This is when it struck Holmes that he needed to find a place where there was plenty of crime and criminals to test this new technology.

It was only one year later, in 1859, that Edwin Holmes decided to relocate his family to Brooklyn, New York.

New York, being a veritable den of thieves, was the perfect place for Holmes to try to market his new product.

Holmes moved his family close to what is now Plymouth Church, located at 57 Orange Street, between Henry and Hicks. At the time, the pastor of this church was Henry Ward Beecher, an enigmatic pastor who gave lively speeches and was in favour of various types of social reform, most notably abolition.

Edwin Holmes moved his family near the church in an strategic effort to protect himself and his family from the same robberies that he hoped his new invention would be able to capitalize on in the greater New York area.

In retrospect, Holmes’ strategy was a sound one. To many, a move to New York, a city growing in size and increasing crime rates, may well have been considered unwise, but this move was business-minded and shrewdly executed.

The proof was in the pudding, as usual.  Once Edwin Holmes started selling his alarm systems to New Yorkers, things started to pay off – big time.

This was, it must be said, due to New Yorkers dire, but not unrealistic fear of any and all types of criminals, including a laundry list of perpetrators, assassins, burglars, thieves, murderers, and more.

This is where Edwin Holmes took the opportunity to deliver his little flyer to many prospective customers.

Entitled,“A Treatise Upon the Best Method of Protecting Property From Burglars, and Human Life From Midnight Assassins”, the flyer made for compelling reading!

Holmes’ system was relatively simple to install, and certainly wasn’t cheap, but it worked.

In the years that passed, he continued to canvas New York with his ads.

He managed to gather many convincing testimonials, including this one by the famous P.T. Barnum, founder of the Barnum & Bailey Circus:

“I have had Holmes’ Burglar Alarm Telegraph in my house three years. Three attempts at robbery have been made within that period, each of which would have been successful had it not been for this Alarm. I would not be without it one month for a thousand dollars. It is impossible to raise a window or open a door from the outside, after the Alarm is set, without awakening every inmate of my house,” — P. T. Barnum, 1866.

In a few short years, Edwin Holmes had carved out a niche for his new invention and things were going well!

The alarms were effectively doing their job of preventing murders, rapes, and robberies.

By 1866, Holmes had successfully installed 1200 of his new alarm units, and business was booming.

The innovation of Edwin Holmes, however, did not stop there.

By the year 1877, Holmes had set up the first network of alarms which was monitored by a central station in New York.  This became known as “central station monitoring”.

Edwin’s son, Edwin Thomas, a savy businessman like his dad, was part of the family business too.

He realized that he could establish more alarm networks by using pre-existing telephone cables, rather than needing to lay down their own.

This lead to the country’s first large 700-alarm network, which he established in Boston, and Edwin Sr. then replicated it in New York.

By the way, much of this history can also be read about in much more depth in Edwin Thomas Holmes’ excellent book called “A Wonderful Fifty Years”.

Ultimately, the senior Holmes became the president of the Bell Phone Company in 1878, and sold his interests in his alarm system in 1880 for a $100 000 US dollars.

Here we can end the story of who invented the burglar alarm, as burglar alarms took on a life of their own, leading us to where we are now.

Today, we have homes that have the potential to be almost completely automated!

All manner of smart anti-theft systems can be controlled with the push of a button on our smart phone.

What would Edwin Holmes, not to mention Augustus Pope, think of today’s world of automated home security?

We think it’s safe to say that they would be quite proud.

Guide to the Best Home Alarms