Last Updated on January 24th, 2020
By: Your Home Security Watch

Wayne Winton is a professional locksmith who owns and operates Tri-County Locksmith Service out of Glenwood, Colorado.

Tri-County Locksmith Service is a member of the ALOA (Associated Locksmiths of America) as well as  SAVTA (Safe and Vault Technician Association).

Today we had a chance to speak to Wayne on the topic of home security, and, in particular, the phenomenon called lock bumping, which is somewhat akin to lock picking.

As a professional in the lock business, Wayne has been there and done that, but there’s always new developments and surprises to contend with.

From having criminals pose as home owners to attempt to break into a home, to all manner of sticky situations, being a locksmith definitely isn’t your average predictable vocation.

On the contrary, it sounds like a constant test of mental and physical endurance.

Tri-County Locksmith Service is a business that is wide-ranging, but some of the services they offer include: any type of lock repair, installation, and just about any type of picking situation where someone might need to gain access to their place of residence, a vehicle, a safe, and more.

They also sell a variety of high security solutions such as the ASSA Stanley Hybrid Padlock.

Wayne also hosts his own educational video series called Wayne’s Lock Shop which serves as a database for helping locksmiths in training.

Lock Bumping – What Is It? 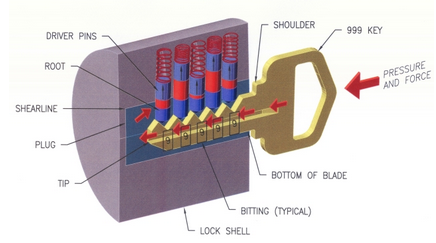 If you aren’t aware of the term “lock bumping”, it is a process by which a lock is defeated using just a few simple tools, including a bump key and some kind of object to strike it with.

The idea that usually causes some people concern is that lock bumping can be done by just about anyone, and there’s a statistic floating around that up to 80% of residential locks have no real defence against this technique.

It has been portrayed in the media as somewhat of an epidemic.

Here is a video that shows a typical media outlet’s take on lock bumping, and you can see why it has caused some controversy.

Since Wayne is a practising locksmith, we were curious about his take on this matter.

Without further delay, here is what we gathered from Wayne Winton during our hour long chat with him the other day.

We did the conversation the old fashioned way – by phone, so I will be paraphrasing him somewhat.  We hope you find this helpful!

*All of the opinions in this article are just that – opinions.  Thanks!

First off, we wanted to ask Wayne how often he himself uses lock bumping in his day-to-day work.  This would require him to carry a bump key, or a series of them.

This might seem logical, since he is a locksmith, and specializes in lock picking. Therefore, you might expect that lock bumping might be another tactic he could employ, especially since it is apparently so easy to perform.

Wayne’s response was that lock bumping is not his preferred method of defeating a lock, particularly when on the job.

Of course, when Wayne responds to an emergency call where someone needs to gain access to their home or vehicle, he has a set of lock picking tools that he brings with him.

His lock picking tools are similar to a surgeon’s tool kit.  Each tool has its own purpose, and generally they are all designed for precision.

The thing is, he says, is that lock bumping is a sloppy and unreliable method of defeating a lock.

It is, by and large, a trial and error method, where the person bumping the lock is attempting to jostle the pins inside the lock by repeatedly hammering the bump key, so that they might get trapped at the shear line and allow the key to turn, thereby defeating the lock.

Wayne prefers to use his precision tools in order to get the job done.

The Psychology Of A Lock Bumper Wayne also talked about the psychology of burglars vs. stalkers in regards to lock bumping.  It is his opinion that lock bumping is not so commonplace in robbery situations as you might think based on media reports.

When it comes to a criminal breaking into your home to try and steal something, your average burglar isn’t actually the type to bump a lock, psychologically speaking.

Instead, they prefer brute force, such as using a crowbar, or their foot or shoulder.

In short, they’d rather just “break” in.

Your typical burglar is not afraid to cause damage, and they don’t have time to mess around with banging on a bump key in the hopes that it will work, nor do they have time to attempt to pick a lock.

On the other hand, a jealous ex or a stalker might be the type to learn how to bump a lock, because it leaves behind little evidence.

Indeed, this type of person is looking for a specific way to get in and out without a trace, because they are a different type of criminal entirely from your average burglar.

On top of this, these kinds of people are more cerebral and would take more time to think about these things.

Of course, this is all a matter of opinion as we said, however here it is backed up by Wayne’s professional experience.

80% Of Residential Locks Can Be Bumped…True Or False?

At this point in our talk, we mentioned the infamous statistic that 80% of residential locks can be bumped.  Regardless of who is attempting to do the lock bumping, we wanted to get Wayne’s take on this.

Now, as a professional locksmith, Wayne has a special insight into this because he deals with locks on a daily basis.

His response to this statistic and the media hype around it is quite interesting, because it shows how this statistic on bump-proof locks can be somewhat misleading.

To begin with, Wayne explains that there are two companies that dominate the lock industry in terms of sales and those are Kwikset and Schlage, with Kwikset being more popular at the moment.

That said, generally speaking, Wayne says that Kwikset have had the tendency to use cheaper hardware in their locks, making them slightly less secure than your average Schlage deadbolt.

Of course, there are many other options, all offering various levels of security.

Here is a comprehensive video where Wayne talks about how to choose a deadbolt lock for your door.

This should give you some useful information that you can use going forward, keeping in mind what we’ve been talking about here today.

What people need to understand is that in order for a lock to be bumped, they have to have a bump key made that somewhat matches the lock.

In other words, there isn’t just one type of bump key.

So, if you picture a criminal wandering around the neighborhood looking to break-and-enter using lock bumping as their break-in method of choice, they are probably going to need more than one bump key for the different locks they will encounter.

Add to that that if a lock is high security, or designed to be bump proof, or tamper proof, this makes the lock bumping even less feasible for the criminal to attempt.

From the perspective of the criminal, there are a whole lot of things that would have to go their way in order for a simple lock-bump to work out the way they want it.

According to Wayne, this is why saying 80% of locks can be bumped is misleading, because yes, maybe 80% of locks on the market today *can* be bumped, but only under the ideal set of circumstances.

And, generally speaking, when someone wants to break into a home, it is simply much easier to try other ways of breaking in (eg. brute force), or just go to the next house.

We concluded our discussion with Wayne chatting about the cat and mouse game of home security, where the cat is the crooks, and the mice are the home security companies who are trying to stay one step ahead of the crooks.

If you’re wondering who is ahead of the curve these days, it depends on the company.

Some lock companies such as ASSA Abloy (Medeco) and Schlage have a long-standing reputation for producing consistently dependable locks that are meant to keep people out at all costs.

Wayne said that there are certain locks that when he is walking up to a house and he sees the lock he is expected to open, he knows his work will be cut out for him.

That said, as usual, you get what you pay for.  If you buy a lock at the hardware store for $30, its not going to offer the same security as a lock that has been especially made for withstanding anything and everything.

What Locks Does Wayne Use At Home?

For his own purposes, Wayne prefers a high security lock that offers full protection, but doesn’t announce itself to the world as being a fancy high grade lock.

The reason being, someone might notice that the lock is fancy and wonder what its protecting.

Of course, its not difficult to get yourself a high security lock that isn’t too show-y, but offers protection against all methods of attack, from drilling, to bumping, to picking, to brute force, and so on.

You just need to do your research.